If you ever wondered about where your Prince Charming has gone, why that frog never became a prince when you braved all good sense and Kissed it – then Twisted Tales is for you.

By projecting fairytales into a modern paradigm Yunyu takes them far far away from the benign stories we knew as children, corrupting everyone from Alice in Wonderland and Bluebeard to the Pied Piper and Pinocchio. Twisting the stories into songs, Yunyu meshes them with contemporary animation and manga art to give a whole new meaning to Disney on ice.

Yunyu’s manager, an award-winning composer/producer who straddles both the theatrical and musical worlds, made his mind to sign her just ten minutes into a showcase set. “I’ve seen a lot of artists work with visuals but they’re somewhat overlaid and mostly make no sense to the music or the mood and they can even be distracting.  Yunyu’s visuals connect in a compelling and emotional way to the mood of the music. I found the balance very exciting and can envisage where it could develop to”, says manager Lee McIver.
In this cross-art form collaboration, Yunyu has teamed up with New York Times #1 Best Selling Manga Artist Queenie Chan and leading animators from around the world to give their characters life. Merging live music with cutting edge technology, this innovative show will be brought to you by Yunyu, her five piece band, VJ and designer Imogen Ross.  Twisted Tales will lead you down the yellow brick road to a universe so twisted that you’ll need a trail of breadcrumbs to find your way home.

Touring to Byron Bay, Brisbane, Melbourne and Sydney throughout May & June, take this opportunity to see Twisted Tales come to life in a totally new way.
Twisted Tales Tour Dates

This post is written by The Goat. Most times he wears a mask and prances about on stage while her Royal Madness performs. Online, he has recently been ordered to write all the information dissemination stuff. In some cultures, he is referred to as the town crier, but this isn’t quite accurate. He doesn’t cry…he mostly bleats.

You can still buy Dorothy

here on itunes // bandcamp // video on itunes too.

On to the tale

I met Queenie Chan in 2005 through Trevor Stafford, who was then chairman of Conflux, a cool scifi convention . I think it was shortly after I played there. Trevor sent me an excited email saying that there’s someone who does amazing manga and had just released vol 1 of a horror trilogy called the dreaming and that whatever I do, I absolutely have to meet her. This is, of course, Queenie Chan.

Apparently, Queenie was also at Conflux but given that I was busy performing, and she was busy book signing at panels ; both of us completely missed each other.

I remember going onto her website Queeniechan.com and really loving what I saw. I adore manga (it’s Manhwa where I come from) and I don’t remember an existence without it in my life without it ever. What I saw on Queenie’s site was quite something to behold.

I remember  reading everything that was on Queenie’s website in one sitting. I love everything from the storytelling to the artwork.

My first thoughts were that Queenie’s work was really different and she had a particular style of drawing that had a very distinctive signature. So I emailed her…introduced myself and invited her to my next show.

Long story short, Queenie turned up at the gig and the very, next day I had a very nice email from Queenie, accompanied by an awesome caricature sketch of me playing. Like so… I think from then on we were pretty much catching up once a week every week for the next 7 years. Not very long time I know, but it does feel like I’ve known Queenie for a millennium or 2.

Queenie came up with a few more art pieces for me after that. I always wanted to return the favour, but being a somewhat morbid kind of storyteller, the protagonists in my song-tales tend to have mortality issues. So it’s not like I can wax lyrical about my good mate…given the subject matter. The next best thing, I suppose, was to invite Queenie to have a little fun in a universe I created called Twisted Tales.

You can see some progress of Queenie’s art in Twisted Tales here. 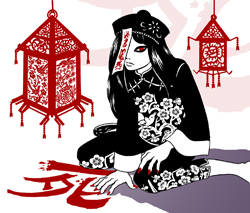 Her initial sketches to a character based on me…and here’s the final incarnation of the character in the realm of Twisted Tales. (the chinese character you see is “si”, meaning death…typical. )

Though the character is somewhat based on me, our nickname for this character is Kiangshi girl. Kiangshi is some kind of ghoul in chinese mythology – for simplicity’s sake, it is a hybrid of a Zombie and a Vampire. It feeds on “Life force” instead of blood and it jumps around alot.
Kiangshi girl runs around alot on Twisted Tales as you can see on the site. Just what she is running from is revealed in time. 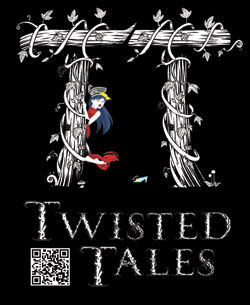 What happens when you get to be Wendy’s neighbours? What happens when you watch them fly but can never be a part of the magic? Meet the Pickwicks. Queenie releases her own take of Peter Pan on her website this week. Check it out. It’s done in an unusual style of Manga and Prose (Which she calls Graphic Prose and explains her reasons for its creation here) 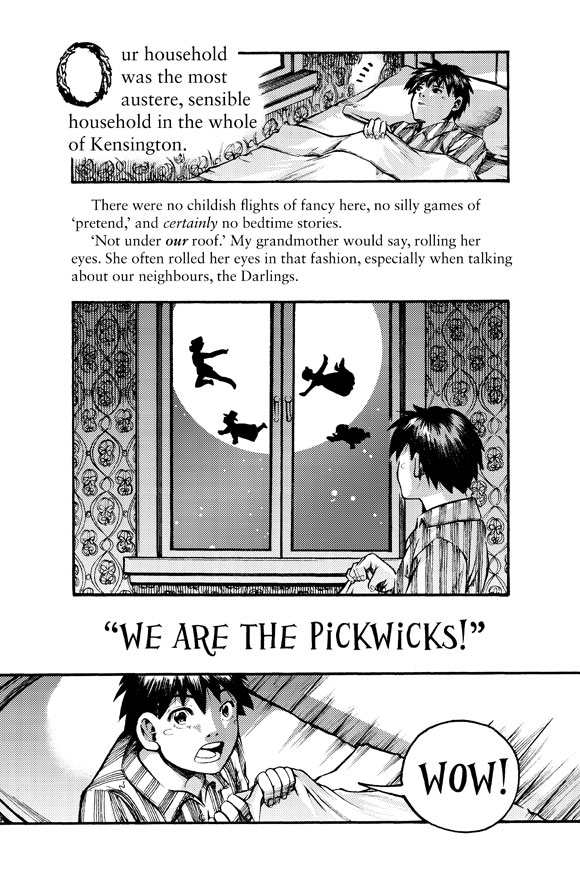 Check out also the rest of her wonderful work here.

– A collaboration with Dean Koontz  – Called the House of Odd

Next up: our secret project with Coolshite on the Tube and impending tours in Australia