RED: How to use stories to destroy ANYONE.

Last month, at the release of Wanted: Storyteller, I covered how all stories are essentially propaganda. Now this is my theory on how it all works. (evil version)

How to destroy a woman through story.

You simply take her tale and pervert it. Write her weak. write her stupid.Say it enough, she will believe it. Once she believes, it is fact. She will teach it to others — like a virus.

How to destroy any culture through story.

Take a culture , make a stereotype, mock said stereotype. Write them weak. Write them stupid Instant skinning via story. Say it enough, and there are many who will believe. Once they believe, it is then a fact. They will teach it to others — like a virus.

Be a serial arsehole — How to destroy ANYONE through stories.

Red is Red Riding Hood.In case, like me, you have sometimes missed glaring pop culture stuff 😀

The tale has its theoretical origins in China (Grandaunt tiger) , Africa (wolf and the kids) and various European regions. The popular version I refer to is about a girl who is sent off by her mother to run a little errand — deliver food to her ailing grandmother.

On the way she meets a genetically modified wolf that speaks human. She talks too much, now wolf knows her address and has beaten her to grandma’s house.

What happens next is interesting. Older versions suggest that rape happens. Red is told to climb naked into bed with wolf. Eventually, she outwits the wolf by pretending she needs the bathroom and ends up tying wolf to a tree (or filling its belly with stones). Leaving it to die.

Something quite disturbing happens in the newer tales. Storytellers in Germany introduce a woodsman who comes in to kill the wolf. Woodsman has no backstory, he just appears. If I didn’t know any better I’d say he travelled by teleportation and was sent there by Robot Hitler from the future.

—if you are going to get ridiculous with storytelling with ZERO context, you might as well not be shy about it. Maybe we should include Rainbow crapping unicorns into the stories, or Godzilla. I like Godzilla. So, just like that, Red got downgraded from self rescuing heroine to non playing character aka. Damsel in Distress. Other times, according to Charles Perrault, she simply dies from her wolf encounter.

All too easy to skin a story and pervert it no? The sad thing is that this damsel in distress version is the one more commonly told today.

The stealing of skins

In my obsessive read of fairytales, there is a recurring theme that happens in many tales — the stealing of skins.

The story usually goes like this, man finds woman frolicking in lake/sea, steals her magic robes which either give her the ability to fly (common in Chinese/ Russian/ Japanese folktales)or swim (see selkie )

Woman with no robe is left behind by her companions (usually sisters who fly or swim away). Man takes woman home. By all descriptions, she is raped. Stories told insist that she falls in love with her rapist. One day woman， who usually has had a few kids by then, finds skin, puts it on and escapes home to the skies or sea. It is said to be a sad love story when the woman leaves. Man pines for her forever.

Nevermind her opinion. Objects have no feelings.

The disturbing bit about the tales are that the stealing of the skin is a romantic gesture. The male is usually depicted as kind but lonely person. Woman, according to the storyteller, is happy to be a sex slave.

Stories are powerful things. In this instance, rape is romanticised. The successful fight for freedom is regarded as a tragedy. Insisting that things are so only hides the wounds of a story, wounds fester in secret, we continue to feel what we feel. Now we feel too scared to share the wounds because no stories of self rescue tell us we can get ourselves out. No stories justify our rage. Women continue to be afraid to report rapes and violence and are ashamed, and shamed for it.

Take this methodology to any class of people you want to negate. The poor, the artists or dare I say…the scientists. Tell them to get off welfare, tell them to make immediately profitable inventions, art. Make them blame themselves. Make them attack each other. Twist their tales. Write them lazy, write them stupid. Blame them if they have nothing left to give. Make them ashamed to call the game unfair.

The wolves at our door have their goons and their dogs.

Today, at the release of RED I’m going to steal one back for us, the ones who bear the mark of the Twisted Tales.I will play their game and add a further mutation to Red Riding Hood’s tale.

What if Red was the wolf? What if it was the Woodsman that took her wolfskin and stopped her from accessing her powers? What if the Woodsman was the one that killed her grandmother who was also wolf.

More excitingly, What if Red found her wolfskin today?

I’m not returning to the woods, the skies or the sea.

I’d be coming straight for the Woodsman’s JUGULAR, then I’d free up a few more wolf skins because I’m sure this serial arsehole has a collection.

Then I’ll write rainbow crapping unicorns into the story. Because RAINBOWS!!

RED has a teaser that lives here:

Next Single from Twisted Tales: RED

Tonight she finds it. Tonight there will be blood.

If you had missed the little sneak peak..Shot/Directed/ Edited by the very talented Raj Muneshwar .It is here.

The lyric video if you want to sing along 🙂

Broadcasting from Twisted Tales – A teaser for the coming Single RED.

Directed and edited by: Raj Muneshwar
Music and Sound by yours truly.

Till then
Your Royal Madness
Yunyu

On this album reboot:- I picked Wanted: Storyteller. 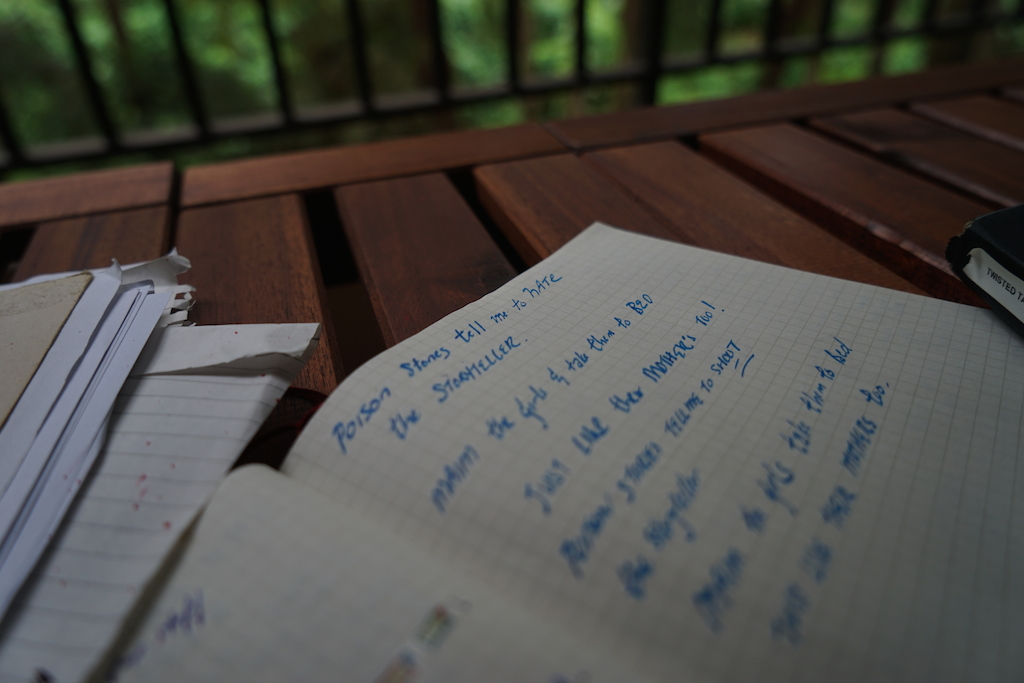 This is an album about the perversion of fairytales after all, so this gives it an idea of what is coming. There are a lot of women in this album, then again, fairytales were once known as old wives tales, so that makes sense. Stories of wisdom and wit from mothers to daughters. There are men here too, just not so many. Maybe I just resonated with the female characters better. When the north winds visit my lair with the muses, the girls always told the loudest tales. So, like any good weaver of tales, many more of their stories get into my web. Storyteller is a good taster of things to come, but I’d like to warn that my album is sonically quite diverse and the tales are a little dark and slippery. Stick around if you are feeling brave.

I had a dream about all the fairytale characters having some kind of class action suit on the Storyteller for some really badly changed tales. Red Riding Hood went from rescuing herself in the earlier versions to getting rescued by a woodcutter with no backstory. It seems that even the damsels that don’t need rescuing are forcibly rescued. Then there’s the happily ever afters, that’s pissing every damsel off if they existed on some plane.

I remember always questioning happy ever afters. It always seemed like lazy storytelling. What happens with life? What happens when we close the books and the characters are allowed to go wondering on their own in the night and on our shelves (or in our devices?)

Then I remember the morals. I get fed a lot of folktales. Some morals I can understand, they tell little children not to go wandering about in the night, or the bogeyman or Hantu Tektek (it’s a big boobed Malay ghost with a portal in her nipples/boobs…very terrifying) takes you. I never got those about beauty and how it had anything to do with kindness.

Then I always wondered what happened to the ugly ones, or the beauties that get old. Do they always become the evil crones? Why do they always become the evil crones? My theory was that if you wanted to keep one gender stupid, it always made good sense to kill their stories and destroy the experienced, and the smart which invariably comes with age and a little wisdom. Keep those that do comply and the ones that don’t? Kill them, break them, burn them as witches, for those too hard to kill make them the Baba Yagas of a world that does not want them.

Which is always a little sad because any society that sets out to destroy and invalidate one aspect of their pool of knowledge will always invariably stunt some aspect of themselves. Maybe that’s why the world’s a little broken these days eh?

If we look under the hood a little, we must know that stories always functioned, in one form or another, as propoganda. This started with the Brothers Grimm, when they strolled Europe through collecting folktales and appropriating them as being uniquely German (not true). Charles Perrault took to inserting christian morals to propogate his Christian ideals. Does not take much to see that stories will mutate with these varied agends. See how you should never trust a storyteller?  (One should also extend this distrust to poets?)

Perhaps it’s easy to congratulate ourselves. We’ve come quite a way for gender equality, or have we? Female bodies are still open for comment and control (breastfeeding in public gives some people hives, abortion is frowned upon, women who choose not to breed are still invalidated), women still fight for equal wages, then there’s the notion of cutting into ourselves to fit beauty standards that simply cannot happen naturally.

We laugh at rib breaking corsets and toe mutating Chinese foot binding, but we haven’t progressed much if we are still subjecting ourselves to impossible perfections. If anything we have now graduated to slicing into ourselves and injecting poison into our faces. Yay progress.

Gender inequality is a knife that cuts into both genders. Part of telling women that they need to be rescued is that men are forced into standards just as unrealistic and stressful. The demands of strength and capability where men have to be protector on all aspects all the time would be hard to bear, and in a world where socio-economic developments are fast changing and not always for the better, it’s a hard gig for many males. Rising male suicides that correlate with rising unemployment rates corroborate with this observation. There is something very wrong twitching in the wires of our media landscapes and the stories we tell ourselves. The gender rules we have written for ourselves are choking all of us, and there are many silently dying or are fast becoming the living dead, living lives we never want for ourselves.

This song is pretty self explanatory and is a snapshot of the perverse standards  from a female centric standpoint. Maybe one day, we will get to kill the storyteller and name their words poison.

Till then, nothing wrong with a little dream about the storyteller getting skewered in my mind.

If you like it BUY a copy.. I’m hungry. FEED my delusions.

Next Single due on a FULL MOON. BECAUSE It has wolves. 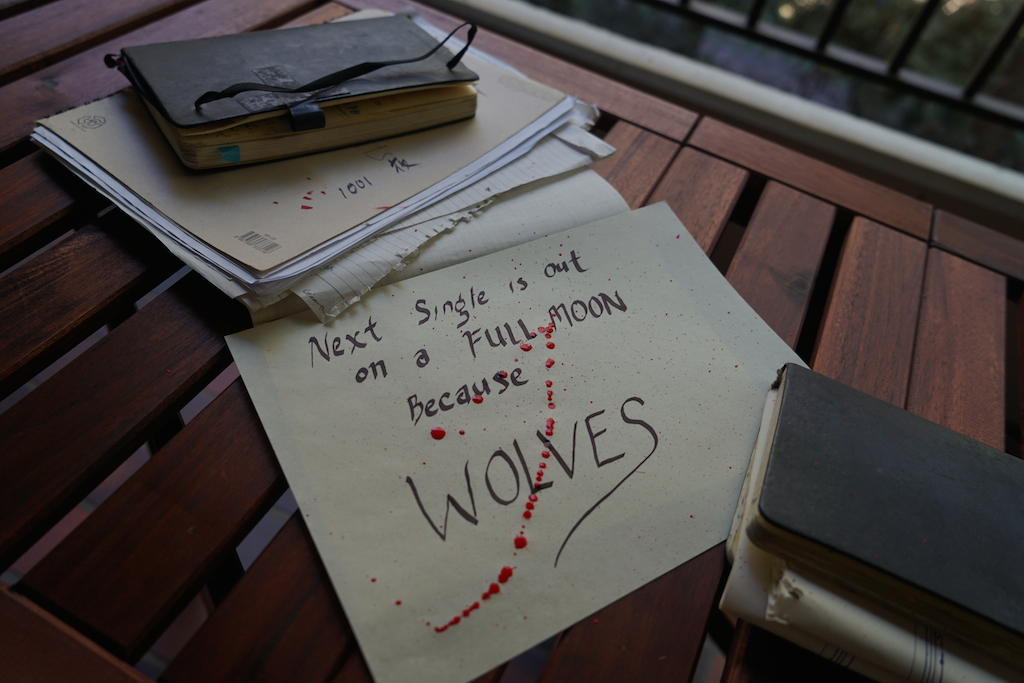