After being shortlisted for the European Union Film award, the festival organiser, Tanja Hladnik of Izola Film Festival maintained contact and were keen to do a showcase featuring some of the music I did while at AFTRS. Woohoo!!

Given that I had gotten curious enough about Slovenia while applying for the award and the offer to so kindly showcase my work , I decided a trip was in order – which made for happiness and excitement all round.

I scheduled an arrival before the festival started because I had long heard of lake Bled, seemed like a nice enough detour to rest up and see the sights before I got onto the festival.

Getting there was probably the biggest challenge. 20+hours of flight time give way to many strange thoughts. By the time I land in Narita airport groggy and delirious for the 2nd leg of the neverending flight, I am wondering strange thoughts about Twin Paradox and why  A-list actors don’t build film sets in flying containers so that they age slower. And why cone of silences don’t yet exist for screeching flying toddlers who have managed to infiltrate every neuron of my brain.

Flights and non sleep can do strange things to the psyche.

It’s evening when I land at Ljubljana airport. I share a taxi to Bled with a kindly Canadian who is also visiting for the first time. This is a good thing because I can begin my day in Slovenia sleeping – a nice end to a nightmaringly long flight. The Sunset here is at 9.45, I’m in alien lands falling asleep to churchbells ringing in Bled. I have 3 days here.
Bled

No jet lag. How is this possible?

Everything here being strange and beautiful could be a contributor of sorts.

Have spent the day by the main lakes and I’m mesmerised by the lake with trees still standing upright in the clear water. I can only describe it as an underwater forest where the birds are fish.
It’s relatively quiet by the lakes so there’s just a lot of thinking time — which is good, I can work on my presentation that I’m giving at the Isola film fest, only just, because everything here is distractingly beautiful.

I catch up through the day with EU film award winner, Director Malina Mackiewicz who has also arrived in Bled on an earlier flight.

A walk round the neighbourhood yields a treasure trove of fairytale-like houses. I can’t stop taking pictures of houses. 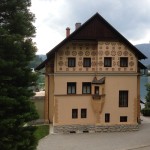 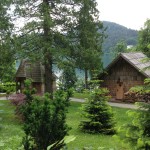 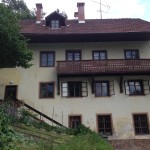 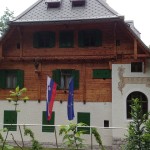 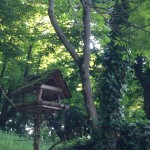 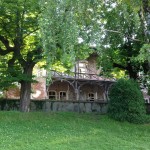 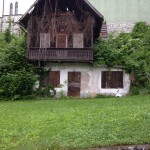 In my talks with film contacts in Slovenia, I’ve been asked to try Kremsnita on more than 2 occasions. I’ve discovered it’s a cream coma inducing delicious cake .

Bled Castle is an easy uphill stroll compared to the usual hiking terrains of Sydney. Great visual paydirt, check out the views! 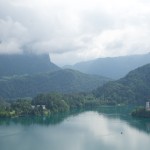 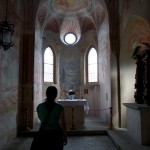 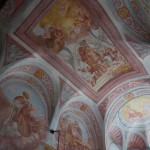 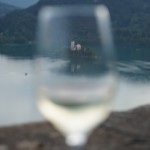 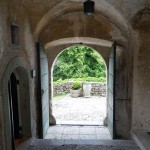 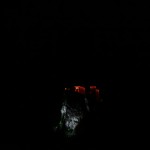 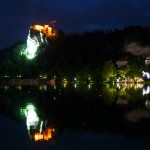 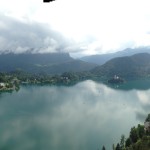 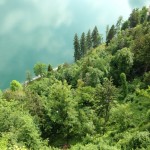 I bought a copy of Slovenian fairytales — because I collect tales like ghostbusters collect ghosts. 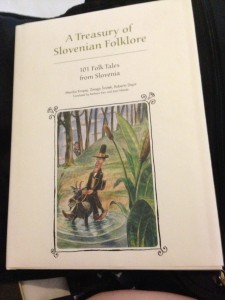 Saw a beautiful lyre at the shops but apparently it was already sold and reserved ..bummer — am now on a mad hunt for said lyre.

I made 2 discoveries amongst many things. First, vodka costs $1.50AUD per cup on average. Very mood improving (if that was anymore possible). Secondly beaches in a Slovenian context are stone beaches as opposed to sand beaches. It’s very quaint. I like it. Lake Bled has such said beach.

I see fireflies up close for the first time in a long while on an evening walk up castle bled. I used to see them in Malaysia as a child, but this was a long time ago. Fireflies are the stuff of magic, I spend the evening nights in an endless game of catching and releasing them. I could do this forever. 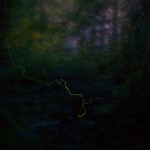 Fireflies are rare and beautiful for me and I’ve read that they have mostly disappeared as development and light pollution affects their lights so there are lesser firefly larvae born each season.

So far I have recorded sounds of ducks, sparrows, churches, churchbells, more churchbells and people speaking Slovenian. It’s a different sonic world to Australia so my ears are perked at every turn.

Leaving Lake Bled was hard. I keep going back to the lake to look at the forest in the lake where the birds are fishes.

It’s a 5 hour journey from Bled to Isola with a Ljubljana stopover. Great. I get to see a glimpse of the capital before trotting off to the festival.

My highlight was the puppet museum in the Ljubljana Castle. 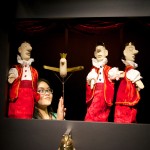 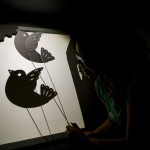 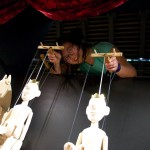 I am enjoying the fact that so far Slovenia has no hustlers on the streets trying to sell me stuff, something I’ve come to expect from the visit of any touristy places I visit, this is a pleasant surprise.

More pics from the capital, which will have to be investigated on a return hopefully sometime in the near future… 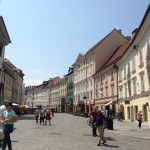 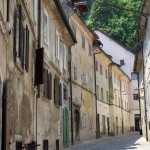 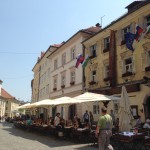 A 3.5hr coach ride and I reach Izola – This is a blissfully beautiful seaside town parked by the Adriatic sea. I’ve only ever seen towns like this in movies so I keep thinking I’m in a movie set.

I’m still weirded out by the fact sunset is at 9.30. It’s wonderful that I can see the sunset and moon rise in one panoramic view.

This is my moonrise timelapse shot

Sunset over venice (that land mass over in the horizon) 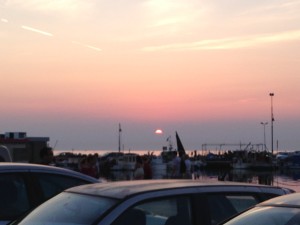 I’m going for a morning swim tomorrow, not before getting my bearings on the festival. 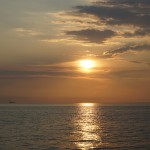 The first day of the festival I find the office of Kino Otok film festival easy enough. (Right at the bus stop I landed in) 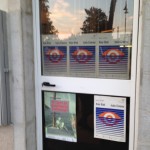 I finally get to meet meet Tanja and the rest of the festival organisers. Isola is a comfortingly small place so I learn pretty quickly that people are happy to arrange meetings in the vicinity of a time, at a vicinity of a place because sooner or later we bump into each other which is a nice and relaxed concept of space and time that rather works. My screenings are tomorrow with a presentation to make the day after so all I have to do is to meet people and get lost in the beautiful buildings.

I’m loving this festival, there are so many interesting people who drop by.

One of my many highlights include meeting Miguel Machalski who is a screen consultant with an excellent breath of credits including Clint Eastwood’s Million Dollar Baby and David Cronenberg’s Spider. The singer-songwriter part of me is fascinated by the process of stories since I see the songs I make as 4 minute mini stories which invariably is what skilled storytellers thread together when telling longer stories. The discussion of music’s role in stories and whether music is written into scripts makes for long conversations. Interestingly Miguel is a trained musician so he tends to write with a screenwriting ear, quite akin to a musical ear. He believes that screenplays have an internal rhythm and harmony, not unlike a composition. I’ve had a similar conversation with a director and editor before where they both referred to rhythm in stories but it’s interesting to me that inherent rhythms in stories happen as early as script development. Maybe in the best of films, collaborators are all implicitly aware of this rhythm, kinda like quorum sensing together.

A chat with other film makers reveal that smaller film festivals are where the party is really at for creatives. Creatives sit and chat and share ideas at their leisure whereas the big festivals, though exciting, are intense networking sessions which leave no time for further connections.

The next day saw the showcase of my music in the films I worked on which was very kindly received. It was fun to be able to talk about the scoring process at a Q and A, given that I’m really quite new at the realms of film scoring, it is quite humbling. 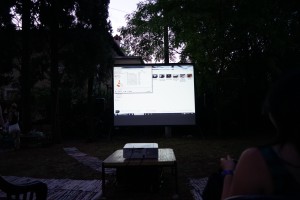 I try and distill everything I learnt at AFTRS into a 30 minute presentation which is quite an impossibility – I hope I helped with some insight to some things – if only a tiny bit.

I enjoyed Milena’s presentation of her film making experiences as a director.

The rest of the days blur into meeting more exciting people including Toma Zidic who worked on the Croatia set of Game of Thrones (Great stories mate!) and soaks in the Adriatic sea. Apparently people in Slovenia find my paranoia about jellyfish killing me hilarious – they assure me that nothing (they know of) is in the sea and trying to kill me. I’m liking this sea more and more, the waters are so soothingly warm in the summer heat and the sun is gentle and does not fry.And fishes! There were so many fishes in the crystal clear, calm sea. What sort of wonderful parallel universe is this?

Other tales of interestingness from Slovenians include the fact that private cinemas are doing really well (more are opening up) as opposed to cineplexes. This is a welcomed opposite to Australia, and many other parts of the world, where cineplexes drown out the private cinemas.

I learn that Slovenia’s income inequality is one of the lowest in the world, and the unemployed have mostly free access to “cultural centres” including cinemas. What a novel idea. I wonder why economies with bigger GDPs cannot pull this off if the GDP was indeed an indication of the nation’s wealth — all this said while I read about Australia’s arts budget being slashed time and once more with feeling.

Then there’s the interesting stories that come out of the area. In an area where the borders keep changing there are amusing stories of houses that travel. One film maker’s grandmother had a house by the borderlands of Croatia and Serbia and in the space of recent decades, had found herself belonging to as much as 8 different countries while having the same geographic coordinates.

Then I’m enjoying the nightly screenings of the festival that either happen in the middle of the town (with a live orchestra!!) , or by the beautiful beach. 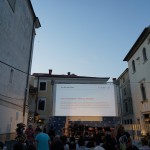 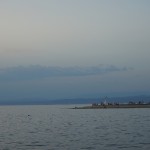 As I write this I recall that there is a Slovenian legend called the ‘Silent Girl’ in which a girl does not talk no matter how beautiful the countryside was. She finally sees a beautiful stone by the stream and is unable to resist commenting on its beauty. The stone shatters at her remark. She decides not to say how beautiful the field was as she imagines she would have destroyed the field as well.
This is rather how I feel about writing about a beautiful country like Slovenia. It is indeed Europe’s best kept secret where it’s small land mass boasts beautiful apline forests,exciting cities, beautiful Adriatic coasts and adorable seaside towns – and every selfish part of me wants it to stay undiscovered, beautiful and peaceful.

So if you do visit, keep it pretty, for I would really like to see it again.be returning for more.