Legend of Zelda Chapter 5 – The blood of the beast

This is the instrument I was waging sonic wars on for Queenie Chan’s Chapter 5 of Zelda’s fanfic. 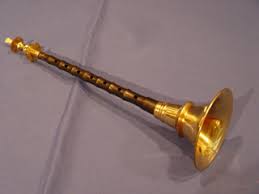 I wanted to experiment with some Suona lines this time round. (Suona is a Chinese trumpet with middle eastern origins and amazing for war tunes)Suona is tricky to write for mostly because the piercing sound it makes makes most people run for the trees and further still. The Chinese use this instrument for funerals and marriages mostly…I suspect it’s the best musical instrument to employ when you have to cut through the festive clanging of the chinese clashes. It’s Chinese New Year…and if you are anywhere near Chinatown and see a lion dance you’ll see how liberally the Chinese use their clashes, Suona’s just great for cutting through the cacaphony of noise.

This is a typical soundscape for liondance…see how liberal they are with clashes.

When I was playing in the Chinese Orchestra in high school I remember feeling a little sorry for the suona players…mostly because they get packed right to the back of the orchestra with quite a radius about them…and when they do play it’s usually to a bunch of scrunched faces and covered ears…for that reason, amongst many I always wanted to write for suona players because I think they are actually beautiful instruments easily misused and misunderstood. Although…I do concede that they cause ear bleeds at close range

This time round, as a draft, I’ve temporarily used the viola players instead
(which is the work in progress version u heard). The viola played most of the suona lines then…

This is the final work

My next single is a mix and master away slated for mid march so whilst we wait…the composing of Queenie Chan’s amazing Zelda fanfic continues!

I’ve been hankering Queenie to draw some frames that let me write some war music. It’s legend of Zelda after all….and I was really hoping to put all that Taiko learning into practice…again…if only virtually.

So this is the near finished result.

I’m not far from done though.(I’m in the middle of making an unusual instrument sit well in the piece and shall reveal this early next wk)