Legend of Zelda fanfic – with music 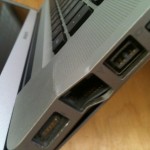 Firstly the reason for my long long offline absence. Had a short break to visit family whereupon i have a freak accident with my laptop (bag strap broke…gravity vs free falling laptop…gravity wins) . This is her now… *weep*

Numerous backups and heaps of luck later…I’m happy to report that my puter is back online. Concussions and all. (Although I’ve been told her logic board is now functioning on borrowed time…and I’ll need to get things fixed soon.)

In happier news – a fanfic for Legend of Zelda

My long time Twisted Tales collaborator, the ever talented Queenie Chan asked me if I was game to do some music for some fan fiction she’s written – namely Legend of Zelda.

Of course I was game. Also, writing for worlds beyond my own was something I’ve been wanting to get into for a bit since I’m a huge fan of Queenie’s work I could not think of a better way to start.

She’s doing a chapter by chapter update every friday and I’ll be writing tracks to go with hers (although I’ll be heaps slower since I’ve got a few things to get out of my way..namely festival applications for next year (fingers crossed), and a mad catchup on various things since my laptop went out of commission for 2.5wks.)

Here’s the first of her many chapters!

Queenie’s asked me to approach the writing for this particular chapter in an RPG format in mind…so more “location music” as opposed to “soundtrack – like film music. So this is my take on what Zora’s watery domain will sound like…nothing to do with the legendary Nobuo Umetsu’s original composition. (I think there are many wonderful remakes there…no need for one more version)

Here’s the track, mixed by Lee McIver who’s been really kind to show me the intricate ropes of composing instrumentals.