First off, happy not so new year, and then the gong xi fa cai, and the very belated merry happy easter celestial zombie offspring day…now that we’re all mostly caught up. Hope you are all well, and thanks for checking if I’m still twitching from time to time. I’m appreciating the facebook pokes, tweets and general updates in your world. Keep your stories coming.

The first order of business is that we’ve got the emo bunny in check. For her crimes of hijacking the blog post she has been wiped by the Internal Ninja Muse Squad and has been placed in the attic. The rest of us are thick in the middle of bon-fire celebrations…yeeehaaar! Feel free to join us…offerings are welcomed 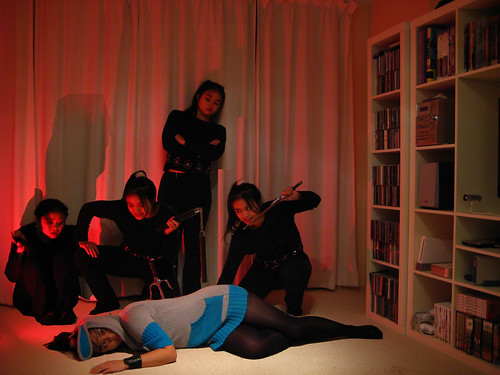 Now as long long promised, we also bring you…Updates! Updates Updates and answers to the long evaded questions of “How IS your album going?”

It’s taking a millenia and three quarters and counting…I’m painfully aware of that. But hopefully, some details I’m waiting on are locked in blood soon, and I can start telling you stories I’ve been bursting to for a good while now. As mentioned the writing bit has been long loooong finished, what remains is that we’re thick in the performance, production and recording of it with some songs practically done, some three quarters through, and some we’re still hiding away from….AND you will soon see why. I blame the voices that go “WHEEEEEEE!!!” in my head.

So here are some discoveries I’ve made in the process of album creation that are fun to share and won’t kill the concept album surprise when it’s finally all done.

1)This album is starting to feel like a long running thesis. I’ve just stolen a look at the number of news/historical and musical references and sound samples tied to the album and now realise that the little worm of a list has grown into a mammoth python of sorts. I’m enjoying the process…slow as it is, but I’m realising how much this feels like a thesis we never meant to write. Still, I’m looking forward to sharing the long list of references once this is done. Tis very good minion fodder…

2) While I think that it is good to write in a multitude of different genres for ONE concept album, one has to be able to perform it too. This means getting into the headspace of different genres of singers and trying to pick up singing in the said style very quickly, while not sounding like an overly schizoid voice actor with a million voices. Make sense?
This means it’s important I still sound like me so there’s a connecting voice throughout the album. I guess it’s kind of like variant type of method acting and in the words of my dead panned manager/producer Lee McIver ” as long as it’s not methodone acting.” (ahaaar..haaar…very funny Lee).

My latest project includes climbing into the headspace of a 75 year old drug addict/ ex-hollywood wannabe who now lives in an alleyway as a lady of the eventides…. I remember that it was difficult to write her into being as a songwriter who only quite recently discovered the interestingness of Jazz (2.5 years ago to be precise). Now, I’m finding it even more of a challenge to sing her into life…or at least deliver a performance good enough to do the wonderful production justice. So practice, practice practice…and a lot of blind faith, a sprinkle of delusions…and alot of listening to Ella Fitzgerald and Billie Holiday – for the purposes of this ONE song. ( You’ll hear of this in another post)

3) In a similar point to point no.2, I’m discovering that the songwriting bit is positively the eeeeasiest bit in the making of this album…everything else is an exponential up-hill climb from there. So there have been periods of re-learning, unlearning and then fast-tracked learning of in the realms of the implicit and explicit. Oh, and trying to wimp out by giving challenging songs to other singers wasn’t an allowable option. The result was that I was frog marched to take a whole heap of vocal lessons…and history lessons, to get some genre deliveries in context. The lessons are coming good, my tendencies to sound like a banshee has been minimised, (this possibly a good thing for the life forms that work with me). Also, no more sandpaper throat from incorrect technique.

On top of all that, long lists of listening homework to do, depending on the genres, which seems to keep the muses very happy…which is always good.

This – for all the stalling and procrastination in the world – will need to be recorded.
The song was last seen lurking in the back of everyone’s minds last week like an especially sick and perverse AI in the Ultimate Boss Stage….The Kraken…the Horror…

4) The fourth point is simple chemistry… Coffee. Coffee + Your Royal Madness = B A D. I recently found out that trace amounts of caffeine makes me hear time funny and I speed up like a speedy speedy rocket..Weeeee!!!!

So just like that….a lifetime ban of my all time favourite beverage at all live sessions.
Un-bloody-believable.
Oh the humanity…

5) As I much as I thoroughly enjoy the whole lengthy process of making the concept album, working with an awesome team of people etc… etc….I’m finding the whole process quite a lonely one as I can’t talk about too much “making of” stuff with my dear minions in real time while I’m creating it. This lack of sharing it is proving to be very un-fun because Your Royal Madness is really very egomaniacal and craves minion attention at all times. So there, something to consider the next time I attempt another concept album…

So this is it for now minions, some sneak peaks, some revelations. More on the way. Till then…

The day nothing happened

First this…the blog below was written a few days ago but comes up here so that I will always remember that making albums aren’t always about peachy day-glows and creams…it’s important for me to remember I think, because I remember too many good things about music. This is not generally a bad thing, but there’s a half senile perky self in me that needs occasional sombre reminding about the ups and downs of the album process before she self combusts into pink happy puff powder….

So here it is below:

Today was a day of no happenings… Nothing wanted to happen…and nothing did…despite everybody’s best efforts. Everything was a fail, so I’m lying here, a temporarily defeated meatbag and feeling very much at the bottom of the world. Attempts to blog ended in a long afternoon of dreamless sleep…this was after 2 coffees…one of which I do not remember drinking. Maybe I was just a little more tired than I thought I would be…for it had indeed been a very strange long day.

The day itself started early at 5am. It involved a rather long journey for the zither and myself. First I had to drop my zither off at the city studio a good few days before. 5am on the D-day, I am on the 1 hour train towards the city, trying to make the 8am taxi I booked to pick the zither and me. All for a 9am start for recording.

Well – the recording space is only 10 minutes away, but you know…I have massive transport related paranoia…especially with taxis in Sydney CBD peak hour…because I think that even when we book them, they tend to explode, implode, discombobulate or travel into parallel universes that do not involve a pre-agreed pick-up point.

Anyways…9am – we are at the said space and there is a mysterious noise in the room. We didn’t make much of it at first, thinking that it was probably the lights (yes…space has lights that make noise). Long story short, which at some point involved a confused but earnest techman and clueless bureaucrats with clipboards, no-one could find the source of the noise. So at 12 noon the results were clear

Sound in room : Your royal madness and her poor producer Rob
ONE : ZERO — no recording for us

I had to laugh (because there was nothing else to do) while poor Rob looked like he was about to go on the red highway on his wrists.

So the zither and I hijacked another taxi back to the city studio. The day was proving to be very long.

My manager, in an attempt to make my day end on a more positive note, invites me to have a play on what was supposed to be a fun piece of music software…he knows that invoking the inner techmonkey is my version of retail therapy.

So 2 coffees (and an imaginary one later), I’m all revved up to go…except we discover that we need something else for the software to work…so….This is the point where I declare day = Massive FAIL and head home.

Thing is…in the context of things, things didn’t go that badly. They really didn’t. Chaos…colossal bouts of stinking, rotting congealed chaos is normal in a recording session. Days like these aren’t really that out of place and at most times I’m ok with it. The album is going slow…but taking sure steps towards the finish (more in next post) so I’ve got nothing to be bitter about. The video clip is finally leaping along so all is good. It’s just…well…today I’m feeling a little worse for wear. Maybe it’s me coming out of an unusually bad and lingering bout of flu that brought the rapid fire coughs, that invoked the long forgotten asthma attacks. Maybe it was holding day jobs, cross training and music all at once. Whatever it was, I found myself slumped into a beanbag 3pm in the afternoon, drained of all positive life force, afternoon tv playing…in an uncharacteristically defeated meat-bag mode.

Then mum called. Her timing was impeccable.

“Everything ok?”
“Yes mostly…except recording didn’t happen today…
“Well it happens (after she nods through the tale), by the way your crazy father is in tears…thought we’d call you”
“WHY?!! Oh my gawd…who died?”
“No…no…*insert repeated cantonese version of touch wood*he’s well, just sleeping off his business trip.”
“then what? anything serious?!”
“your mad MAD father just had a very vivid dream about you playing to a huge full house, and your albums selling out by truckloads…though we’d share it.
“…”
“Strange dream isn’t it? ….Still if it happens I won’t be surprised you know..I can’t wait till you finish…you’re putting so much into this…”

A quiet assured vote of confidence is needed on most days…and on a grey day like this…I needed it more than I realised.

Fight another day won’t we?

Dream well. Till next time.

** Update: Your royal madness back to her perky deranged self and is working on a blog that details upbeat album developments. She is currently laughing at her other weepy self for breaking the emo meter 3 days ago.