All along the watchtower

I think they are a musicky bunch. 3 Kids. I think. One plays the piano, one the violin and the other owns a drum set.

So far, the one with the piano has been playing inspector gadget for a month and still not getting it past 1st verse.

Violin person is trying to play the Simpson’s opening theme song and hasn’t gone past the 4th note, for a month.

The Drummer, drums at 7.30pm when I’m fresh out of the studio, and need to be music free for awhile….and…well he’s learning…but the drumming’s very bad and I’m too polite to tell him to stop. Except he does stop, intermittently, and picks up a completely different rhythm before he masters the last. I want to twat him on the head to tell him to practice properly.

Then I hear the tunes of inspector gadget again with the same wrong notes since last month and I want to fire missiles from the strings of my all powerful zither. 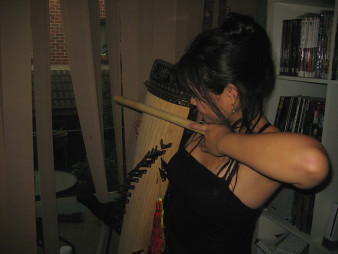 This entry is brought to you by your royal cranky, who should really be kinder to budding musicians.

For those whose muses need the naughty chair..

Before there was order. Then the muses said “Let there be NOISE” 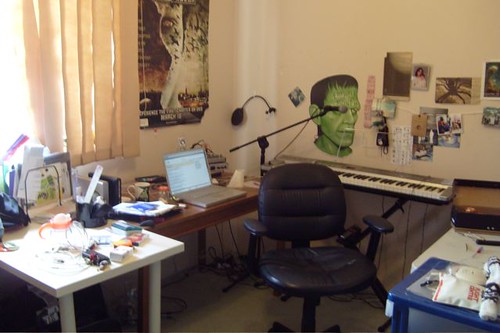 And the above where I spent the initial weeks/ months (post Spiked Soul) going into a very bad sort of a bitey, rabidey human bean. All this for trying to write new material. 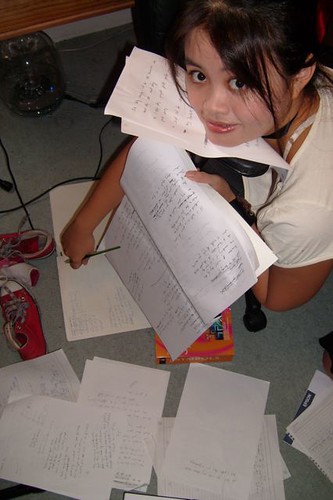 There’s something very difficult about being creative all of a sudden. So if there was some sort of metaphysical hospital for suddenly non functioning creators, my patient file would probably look like this.

Patient Name: Yunyu
Symptoms: Patient exhibits bouts of rage, complains of sudden inability to write, bouts of random nausea, talking to self, telling thin air to shut up, short spurts of head banging on the nearest hard object, repeat random violence sequence, has zombie delusions, was caught trying to chew through the scalp of a fellow artist
Diagnosis: Muse Riot-itis

My first album was mostly written in Perth, which for some reason always makes the muses happy. For the most part, I think it is well and truly because my muses are secretly beach bums that were too lazy to even join the reincarnation queue (which is why they don’t have a body and feed off me instead.) …if you believe in that sort of thing. Then said, Perth IS a beautiful place and if ever there was a portal for the birth of good music, Perth definitely had one.

I’m not sure if it’s the epileptic seizure inducing city lights, or the fact that there’s simply too much entertainment (whether u want to or not) in the city, or the fact that I am just a cranky cranky crankpot writer with a helluva writer’s block. Somehow along the way, focused writing became some kind of a colossal challenge.

Spiked Soul was an album that came relatively easy. I was bored in Perth, I heard voices, I wrote what the voices said/sung. The whole process was very much like minute taking in some sort of a madhatter’s tea party kind of way. Too easy really.

Maybe I had unlocked some sort of a vein, this writing thing, I suddenly had no control over it. I was hemorrhaging muse spew and there was no end in sight. If I had to blame one more thing it was the huge amounts of graphic novels I had consumed a little after Spiked Soul. Suddenly it was too many ideas, too little tunes.

This meant that it was hopelessly difficult to finish a song without going crazy and trying to change the lyrics/ story in the tune every 30 seconds. The end result was me lying helplessly in a heap of scrap papers with no known musical tune in sight. My overzealous muses had mauled every single visiting tune to bits.

While most of my fellow writers’ vocationally suffer from what is known as a writer’s block, I believe I was battling some tsunami version of a writer’s flood, and , frankly, not handling it well at all.

The result is inherently the same. You end up not completing anything worthy of mention. You also want to eat all other songwriters/ creative people for dinner, very literally. Somehow, in your deepest delusions you hope that by doing so you could maybe absorb some of their inspiration and cleverness back into your system. Then you have to deal with the paranoia… OMG I’ll NEVER WRITE AGAAAAAINNNNN!!!!

For awhile I tried everything, I did the whole artist way thing. I wrote pages (for those not in the know, pages are a form of writing exercise u do, involves a blank page, a pen and just writing anything you want till you fill up 2 pages..worth a try).

I did a hippie dance, I went to see beautiful sunsets and fantasized about beautiful beach people becoming whales and mud wrestling each other and winning sea slugs… I picked up hobbies, attempted knitting….(nuff said). The result of all this positive attempts resulted increasingly eye-watering levels of panic with no cure in sight.

This was until I was kindly reminded of the concept of the concept album.Of course, this is right round the point where I disappear from the internetty in a long spur of a non-naked EUREKA! moment.

Turns out that the cure for Muse-Vomit-itis is all too simple. All I have to do is to write according to a self made up rule, no exceptions, no excuses. That unless a story or an idea worked under the new rules of the newly created universe, muses had to shut up and come back when they had something valid. The new rules for play seemed to work better than the best of super nannies for the rogue muses.

Dedicated to writers/ songwriters/ creatives who suffer from some version of a muse riot/ strike. Hope you find your muse nanny soon. Keep writing. (even if your writing looks like mine…which is like rancid cat pee) 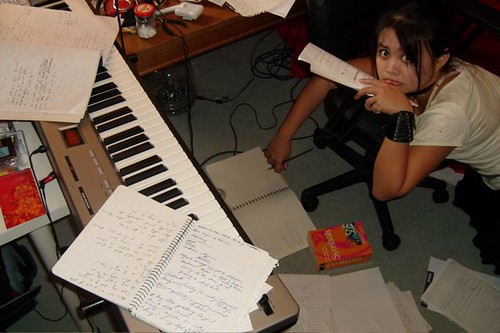