Dear minions,
Gig this Friday at Sonar (Luna Park, Milsons point, Australia) with Aleeoop, videoKidz and your royal madness. If you haven’t booked yourself a ride into the mad teeth of the Luna Park. Do so now. I promise to make your childhood delusions come true. Well, most of them anyways. 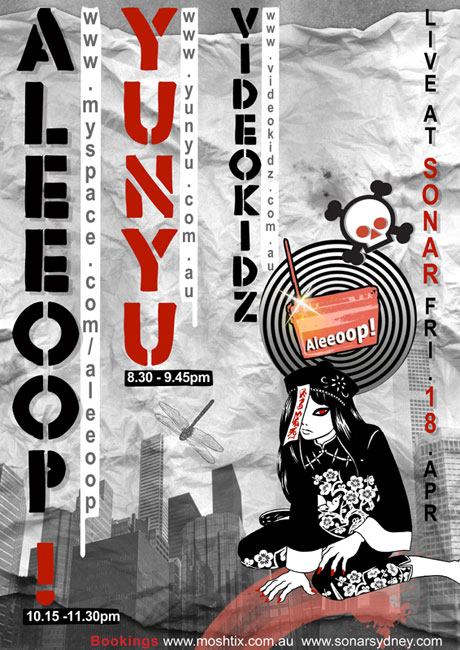 I made maggots last night. That’s all I did. Honest. Swear. Maybe.

See there’s this pen you can buy from the main chain stores…toy section… The real ‘real’ magic pen they call it. All you need to do is to use the pen to get a sample of the lifeform, draw, put it in the sun and voila, you have lifeforms of your choosing in any shape you desire.

I remember watching an estranged maggot crawl by on a lazy summer day. I reach with my pen and penetrate the writhing white lifeform….slowly. First it curls around the nib in a lover’s embrace and still I push. It curls some more. I am aware of the deathly silence that surrounds this moment and then CRACK. I have broken the white squirmer and all is still as my vampiric pen refills it’s juices. Strange sucking sounds, my pen suckles it seems, and the maggot disappears.

Then there I was doodling, for no reason at all, a nest of maggots. And as the sunlight hit, they squirmed across the page as they made their transition from 2D to 3D. One maggot had become many. I watch the strange dance of white maggoty joy and then “Slam”. I was bored and I didn’t want the worms on my bed. Pity about the notebook though, it’s probably ruined or very squishy. It’s a nice day anyways so I figured I’d head out.

I step out into streets into a world I don’t recognise. My neighbour is killing her husband and tells me she going to draw a better one. Says she likes him younger and with more hair. When she’s done he’ll do her. It’s all very scientific. Meanwhile, She’s happily stabbing him in the eye with a pair of gardening shears. Tells me that this is all rather therapeutic. 40 years of marriage, this has by far been the most satisfying moment. I wonder when she’s going to get to the drawing part.

There is a long line forming where my best friend lives. She’s an artist so she draws pretty people, and today, she’s asked to be a mass murderer. She’s as efficient as ever was though. She’s got assistants who look like real life manga beauties and they are taking numbers. In the waiting room she’s got dead bodies strewn all over the clinic with the magic pens sticking out of their jagular. A roomful of suckling sounds.

One by one the pens bubbling with warped DNA bits are delivered to her studio/clinic, where, in a few minutes, the assistants carry her lifelike artwork out of her studio to the sun to dry.

One by one, youthful sailormoon like figures crawl out of the paper. A few hello kitties come out of the room with shy hellos too. This was way way weirder than cosplay. A couple of Angelina Jolie look-alikes stroll by too.

“Are their souls intact or have they been redrawn as well, they still the same person after this?” I ask

“Perhaps, maybe, whatever, think it works like plastic surgery probably, can you hand me that spray paint?” my friend was evidently an artist busy at work.

I spy a couple of cops at the clinic and they have signed on to be drawn as teenagers. Something about going back to school and making sure they never end up in law enforcement again.

Meanwhile in the parks, trees have taken on phallic shapes as young vandals inject their magic pens into trees and re-draw tree DNA into shapes they deem funny. On the other end, bunch of greenies are busy poking/ killing each other with the pen and turning each other into trees in an attempt to decrease carbon emissions. There are a couple of young tree saplings, so I presumed they started with their children.

The tree beside me starts a song and a speech about the joys of photosynthesis, peace and the hippie movement amidst much joyful babble. He sounds like a senator I know. I had to laugh. All around me are human trees still wearing their hemp made shirts.

The trains comes and I stumble into the city where the bling bling boys are chasing girls around with new and improved appendages, some tentacle-like. Some of the girls have turned to a triple breasted look….some have gone for more that that. 2 real life Sheela-na-gigs stroll past me, closely followed by Mona Lisa herself…and my brain broke.

I scream, the dream guards pull me out, drag me through and I land cold, sweaty and in the dark, tangled in sheets.

I am Yunyu’s screaming neurosis.