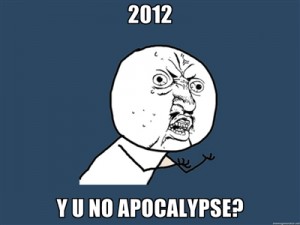 Ah well…the end to another year and it looks like humanity’s going to survive. The Mayan thing has been pretty underwhelming…despite the Prime Minister’s claim to the contrary…No Zombie Apocalypse, although it humours me to know that America’s CDC has instructions for what to do if it does occur. If you are a fan of the I am Legend (Although I’m more Omega Man) version, then we are on track for a precursor of the Zombie Apocalypse since we have discovered the ultimate cure for viruses.

Having said that… these could be famous last words.  Julia Gillard might be right.We might all have creative and explosive ends in the next couple of days. So before then a Merry Christmas and Happy New Year and all that…just in case it’s all dandy after all.

Now that that’s out of the way and we are ALL feeling optimistic, I have an announcement to make.

I’ve decided to properly learn me a little more of the technical aspects of music. This includes the theory, orchestration, related sequencing stuff. While making Twisted Tales and (as a result) jumping from genre to genre to accomodate the diverse tales, it had become more apparent that I should really know what goes where…not just whack a sound at things…although that does sometimes work…I just like to make things work a little better…and clearer.

Until recently I have ran screaming from the prospect of learning any aspect of music formally like I would the plague. I was taught piano classically in Singapore, and  music then was more about discipline, physical torture and a lot less about enjoyment. As a result, I’ve watched my brain make a habit of shutting down or firing up its internal screensaving mode in protest whenever there is speak of anything technical in music.

This is a bad habit that I will destroy in 2013. Barring Zombies and the apocalypse of course.

Not being able to speak the same language as fellow musicians is proving decidedly inconvenient. All well and good to have my own invented musical language, until I have to communicate what I really want…then I feel martian, and not in a good way.

There’s a limit to the extent I can analyse the more complex music I like. I can usually splice music up quite comfortably for myself just by hearing it…but frankly I think there’s a limit to my musical developments if I keep running away from the technical aspects of things.

This is also going to give me an excuse to bring you through the realms of my musical journeys…which will be Twisted Tales and Queenie Chan’s Zelda Fanfic all while I learn….and I have miles to go in this aspect of things.

Also…I’d like to open the blackbox that is my creative process. There is a process…I don’t just pull things out of a glued hat with cats….(that’s…. only step 1)

So in 2013, more musical drafts online, me learning how to read music again, and getting better at sequencing and programing and more MORE better music for all.

Weaponry (for they are important for level-upping)

I have now armed me with

2) Various theory books. ( I have a feeble memory of grade 5 theory, the neurons have sent a search party for it)

3) Logic (the software and the concept)

5) and the ultimate power-up – Lee McIver the co-producer of Twisted Tales will put the aural shiny on the tracks as they finish as well as point the gaping holes in the compositions…which has happened countless times.

The coming days/ weeks shall have more on Chapt 2 and 3 and the various drafts of my music as well as more of the creative processes.

Meanwhile I leave you with sketches of my music to Chapter 2 and 3 of Queenie Chan’s Zelda Fanfic. made SHINY by my manager/producer Lee McIver.

Butterflies and Small Shen – The Trailer

Dear Spiderlings,
Kylie Chan and Queenie Chan’s wonderful book Small Shen is finally out and about. Released by Harper Collins. This book also contains a FREE copy of Butterflies (Third single of Twisted Tales) which is available with the book.