of Twisted Tales and were-santas.

How are we all? Been helluva while since last update but much has been happening. We’ve been real busy putting the final bells and whistles onto the second album and we can now share…! YAY!

Firstly we are doing a wonderful piece of collaborative work with Music, Manga by Queenie Chan and animation by The Commonist.

We will have more about them in the coming weeks so keep the eyes peeled.

The project is called TWISTED TALES – which answers the question “What happens when fairytales infect our universe?”

So it is madness, new site should be up in the next couple of weeks. New songs, new album. All in a little bit.

Meanwhile…I return with a piece of music that tries to explain why Santa Claus can fund your Christmas, good spiderlings – done to the tune of It’s the most wonderful time of the year 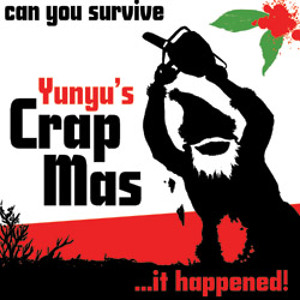 Artwork done by Queenie Chan. See more of her work on Queeniechan.com

Join the mailing list http://yunyu.com.au/home/mailing-list for a FREE copy of the track or click the “Buy” link at the embed…which still gives you the FREE goodies!

It’s THE crap crappiest time of the year ?My head’s jingle belling?And hippies are telling me “Be of good cheer” ?It’s the my most sorrowful time of the year ?It’s the crap-crappiest season of all
When I become santa, and no I’m not mental
I just want a cure?from this crap crappiest sickness of all ??I was making a killing
In stock market trading
Cashing in on all the loopholes
I’m worse than Charles Ponzi
I took more than Madoff
But hey you’re not perfect yourself
?It’s my most sorrowful time of the year
A were-santa he got me he bit me that bastard
and now once a year
I’m transformed into this ponce with the bells??I’ll pay anything for a cure for this sickness
and swap this for lycanthropy
And anything’s better than riding with sleighbells
and giving my fortunes away.

It’s the most sorrowful time of the year