Nov 18th 2010 –
Your royal madness headlines in a showcase of of 3 very different female singer songwriters each highlighting a different side of the Venus.

Showcasing the dark side of Venus is Yunyu – Your Royal madness. I will be sneakpeaking stuff from the new album…actually quite a lot of it.

Support Anikiko, showcases the love that is Venus. Soulful and sensuous, Sydney songstress Anikiko will be performing songs from her newly released album, Fibonacci’s Stream and well as other stunning works. Influenced by jazz greats and electronic pioneers, AniKiko effortlessly pushes boundaries with her genre-bending style and luscious performance.

Joining these considerably talented artists will be performing circus and physical theatre interludes as well as the visual feast served up by Yunyu’s Goat.

I also have 5 double passes to GIVE AWAY! Details shortly. Those on newsletter get first dibs. get on there this minute!! 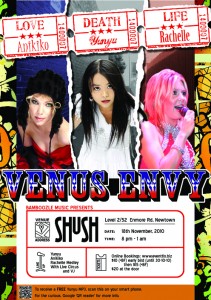 Meant to get around to this sometime. But my time got eated. There…pics from the show and upcoming show announcements in a jiffy. All pics courtesy of Alissa Bruce .